Good things always come in threes, and that’s very much the case with American writer Dorothy Canfield Fisher, whose work can currently be celebrated on three different blogs, and I’m trying to join with all of them! To be honest, I’m cheating, because I’m re-posting a piece on The Home-Maker from way back in 2012, which is so long ago I’m sure everyone (including me) has forgotten what I said. I’ve reread it, enjoyed it as much as the first time, and was going to write a new review, but my thoughts are pretty much the same, which may indicate that wonderful though it is, it’s not the kind of the book where you find something different to focus on each time you read. Anyway, here goes…

When my brother and I were very young, my mother used to turn the dining room lino into a skating rink, or the frozen Arctic wastes, and we would slide across the floor… it was years later that I realised this not only kept us happy, but also got the linoleum polished with the minimum of effort! And it’s the kind of ploy that Lester Knapp would approve of, for Lester is a house-husband with a highly individual take on housework and childcare.

Actually, I’m jumping ahead, because when we first meet Lester, he’s not a house-husband at all. He’s working in the office of town’s big store, where he’s bored, unhappy and badly paid. A quiet, unassuming man, he’s a dreamer, who loves poetry and books, but hates his job, and is not very good at it. He and his wife Evangeline have three children, Helen, Henry and Stephen, and Evangeline is, as everyone is always telling us, ‘a wonder’ – but wonders are not always easy to live with.

On the face of it she is the perfect wife and mother. Her house is always in apple-pie order, she produces lovely, healthy meals, runs up fashionable garments from old clothes and fabric offcuts, and even creates stylish furniture from old pieces. Make no mistake, Evangeline is a Domestic Goddess par excellence – but no-one is easy when she’s around. Members of the Ladies’ Guild are a little in awe of her ability, and are uncomfortable in her presence, while her down-trodden husband and children suffer from what used to be called ‘a nervous stomach’, and live on tenterhooks, always fearful of doing or saying the wrong thing, and worried about not living up to her high ideals.

And Evangeline is unhappy as her family. She has eczema, which never improves, and her hair is falling out in handfuls as she slaves away, obsessively cooking and cleaning to keep the house ‘nice’. The book opens with her scrubbing furiously at a line of grease spots which lead from the stove towards the door of the dining-room.

“Henry had held the platter tilted as he carried the steak in yesterday. And yet if she had warned him once about that, she had a thousand times! Warned him, and begged of him, and implored him to be careful. The children simply paid no attention to what she said. None. She might as well talk to the wind. Hot grease too! That soaked into the wood so, She would never get it clean.”

You have to admit, it’s a pretty unusual start to a novel, and over the next few pages we see Evangelin’s iron will, and her feeling of resentment that no-one realises what she has to do. For her, the clock never says ‘tick-tick-tick-tick’ but always ‘So much to do! So much to do! So much to do’. The only person who stands up to Evangeline is Stephen her youngest son,who has a will as strong as her own, and is given to temper tantrums. He is generally regarded as a ‘problem’ by friends and neighbours, who are mystified by his behaviour because Evangeline is such a perfect mother.

Then everything changes. Lester loses his job and contemplates suicide because he can no longer support his family. He falls off a neighbour’s roof while extinguishing a fire and is confined to a wheelchair, unable to walk or work. The future looks bleak indeed. But Evangeline, who is a feisty sort of woman, applies for a job at the store, and the owner decides to take a chance on her. She is given a position in the ladies’ wear section and turns out to be a brilliant saleswoman. Not only can she sell well, she’s a quick learner, good at managing staff, the customers love her, and she’s full of innovative schemes to attract customers, increase sales and maximise profit.

While she works her way up to a key position at the store, Lester stays at home with the children and takes on the role of home-maker – where he is as innovative and successful as his wife is in her new role. His solution to the problem of cleaning dirt off the floor is to have it covered with newspaper each morning, and to clear it away each evening, before Evangeline returns home. It has the added bonus that Stephen can paint without making a mess. As Lester and his children tackle the difficulties of cooking and cleaning, they learn about love, responsibility, commitment, how to share things, and how to air their own opinions and make a contribution to family life. Gradually the children become confident as he tells them poems and stories, plays games, involves them in running the house, hugs them, and makes them feel loved and valued – and they, in return, adore him.

The transformation of Stephen’s behaviour is especially touching. There is a key moment when Lester understands Stephen is petrified that Evangeline’s threat of washing his Teddy-bear will be carried out, and that his much-loved, dirty, old toy will be spoiled for ever. Lester has to convince his younger son that nothing will ever be done to teddy that he doesn’t want. And the final turning point comes when Stephen realises that when he goes to school his father will miss him. In one scene Lester, anxious to channel the little boy’s anger into some form of positive action, gives him a rotary egg whisk and asks him to beat a ‘pretend egg’ and turn a bowl of soapy water into froth. Stephen lacks the co-ordination and experience to know how to use the whisk, but he sticks at the task and eventually succeeds.

And what of Evangeline all this time? She comes home from work each day tired, but fulfilled. She’s no longer bitter about the hand life has dealt her, and as she no longer has to do the housework she hates so much, she seems content to spend her evenings relaxing, or playing cards with her family. And, since she is earning good money, they are able to buy luxuries for the first time ever, and she even agrees to Henry having a dog and a bicycle. I may have made her sound unlikable, but she’s not. She’s warm, passionate, quick-witted, intelligent, and has this tremendous vitality, and an urge to do everything to the very best of her ability. I could understand her frustration with the monotony and drudgery of housework, and the fact that once everything is neat, and clean, tidy, people come along and mess it up, so you have to do it all over again… and again… and again. She loves her children – but can’t cope with being with them all the time. And the relationship between her and Lester is quite tender. I think they are such opposites that each is able to give the other what they lack.

But there is a cloud on the horizon for Lester recovers the use of his legs, and although he tells no-one, his wife discovers his secret, and both fear that they must return to their traditional roles – he as a wage earner, and she as a home-maker. Neither feel they can face the censure of small-town America by going against convention and continuing as they are, and in the end it is the doctor who finds a solution that will ensure the continued happiness of the Knapp family.

I loved this novel, which is published by Persephone, but it must have seemed pretty outrageous when it was written in 1924, because it featured role reversal and progressive theories about education, both of which threatened the established order of things. More importantly, it highlights the importance of valuing people for themselves, whatever their age and sex, and shows how difficult it can be to stand up against the expectations and conventions of society, and to do what is right for you, rather than being pushed into a role that doesn’t suit you.

There was a certain amount of sentimentality, which is not always to modern taste, but it wasn’t obtrusive, and was in keeping with the characters. Overall, I liked the way it was written, especially the shifting viewpoints, which enable us to see things from the perspective of the various characters – even the children have a voice.

The Virago Group at LibraryThing have selected Dorothy Canfild Fisher as Author of the Month, while Jane at Beyond Eden Rock will be paying tribute on February 17, as part of a year-long Birthday Book of UnderAppreciated Lady Authors (you’ll find the introductory post here). Finally, Jessie at Dwell in Possibility is staging a Persephone Readathon (click here for details). 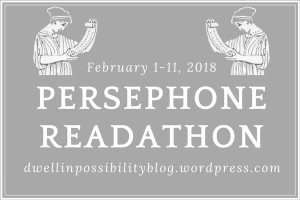 Follow The Book Trunk on WordPress.com
Lovely bargain box of sketchbooks from #artesaver. Excellent quality and value. And they are in a nice sturdy box which will store home-made stamps and stencils. Thank you!

the beautiful world of watercolour painting