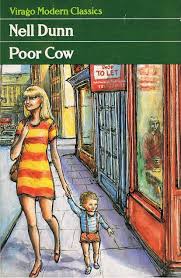 Poor Cow, by Nell Dunn, was one of those iconic ‘social reality’ books of the 1960s. Published in 1967, it passed me by at the time (I was probably too young), but later I remember seeing the film, starring Terence Stamp and Carol White. It was controversial, presenting a picture of East End life that many people didn’t know existed – it was more than 20 years since the war had ended, and 10 years since Harold Macmillan’s famous ‘we have never had it so good’ speech, so there was an assumption that ‘homes for heroes’ had been built and a new social order established. But Dunn revealed the world of the urban poor, with bad housing, inadequate education, ill-paid jobs and little opportunity for improvement, and I think this book still has relevance today, when the gulf between rich and poor seems greater than ever. But it’s not overtly political, and Dunn doesn’t judge or campaign. Dunn simply presents a slice of life, telling it like it is.

At the novel’s heart is Joy, 22 years old, with a baby son (Jonny), and a husband who is a thief. We see the world from her perspective – her thoughts, her dreams, her relationships, her friends, her jobs. She is, as Margaret Drabble points out in the introduction to my 1988 Virago edition, both immoral and amoral; but she’s also warm, loving, passionate and gutsy, getting by as best she can, just like everyone else, seizing life with both hands and embracing what fate offers, whether it’s good or bad. She’s a curious mix of street wise and innocent, but she makes her own decisions about her life, refusing to see herself as a victim and, since she never stops to think, the story has a vibrancy and immediacy.

“I’ve always been a daydreamer, me Joy – Joysy as my Auntie calls me, Daydreamed about – oh, loads of things – just to have something, to be something. I don’t want to be down and out all the time,” Joy tells us, which is kind of sad because you just know it’s never, ever going to happen. For a short time things start to look up and the couple get a luxury flat in Ruislip, financed by Tom’s ill-gotten gains. Joy doesn’t have a very high opinion of Ruislip. “The world was our oyster and we chose Ruislip,” she says. But they don’t stay long because he’s sent to prison and Joy moves in with her Auntie Emm, who lives in one room, ‘off National Assistance and pills’.

Then she gets together with Tom’s mate Dave, who is quite nice, but a bit dopey, and a very inept buglar. He arrives home one night with pockets full of necklaces, and relates how the ‘old girl’ wasn’t away after all, so was locked in the toilet while he and his friends took her jewellery. “I gave her a glass of water when we finished,” he tells Joy (but omits to say that one of them hit her over the head). The police are hard on his heels, and as they hammer on the door he tries to climb out of the window – until Joy begs him not to leave, at which point he returns and lets them in!

Soon Joy’s back with Antie Emm, working as a barmaid, doing some nude modelling (for £2 an hour, which seems like a fortune), and having lots of sex – she says she was never bothered before, but now she takes her pleasures when and where she can. and is hard-headed enough to get what she can out of the encounters, but she has her standards, and refuses to prostitute herself, maintaining that ‘you lose the pleasure of it if you turn professional’. She also writes long, ill-spelt letters to Dave, vowing eternal love, promising to wait for him, and giving him an (edited) acount of her life. Eventually Tom is released from jail and she resumes her wifely duties, and although he doesn’t seem to appreciate her efforts she remains optimistic about the future:

“Then sometimes, when he’s home, he’s good to me, that’s another thing. If he were rotten all the time I could go but sometimes for a week at a time he’s all over me. I can’t do no wromg – I’m a smashing wife – he even lets me wear me pony tail – and I feel a proper mum, I feel great. I go up the park with Jonny and buy daffodils for the table and put a red tulip in the toilet to make it smell nice and the place looks smashing and we’re happy again.”

The one constant in her life seems to be her fiercely protective love for her son (although I’m not sure she would be regarded as a good mother by today’s standards) and it’s hard to think of a similar lterary heroine – the nearest equivalent might be Babe Gordon in Mae West’s The Constant Sinner. But Joy is warm-hearted and much more human – basically, she just wants someone to love her. And Dunn is a better writer. Oddly, her writing probably has more in common with Virginia Woolf than Mae West: the life she portrays is a world away from the rarified atmosphere of Woolf’s world, with its well educated, well-heeled characters, but Poor Cow is written in a kind of up-dated stream of consciousness, using colloquial language. It moves between the author’s words, to Joy’s thoughts and her ill-written letters to her jailed lover Dave (her spelling is idiosynccratic), but it is always about her or from her point view, creating a very personal picture of a of a poor, ill-educated working class girl. According to Drabble the ‘elegance’ of the prose ‘conceals the craft’ but I don’t think elegance is the right word at all. Woolf may be elegant, Dunn is not. But there’s a freshness to the writing and the novel, which moves from episode to episode in an almost picaresque fashion, is actually quite tightly structured.

Dunn came from a ‘good’ background, but lived in Battersea, worked in local sweet factory for a time, and listened to local women talking about their lives. This, presumably, provided material for Poor Cow, and Up The Junction. Today she seems to be somewhat forgotten, but she deserves to be remembered as a pioneering author. She was one of the first novelists (male or female) to write a grittily realistic novel about working-class women in the 20th century, showing their relationships and sexual desires while exposing social issues.

This has been languishing among the TBRs for ages, and I thought it would make a nice start to the The Official 2018 TBR Pile Challenge, hosted by https://roofbeamreader.com/2017/11/07/announcing-the-official-2018-tbr-pile-challenge/ but I forgot to sign up while I was ill. So I;m having my own unofficial TBR Pile Challenge!

the beautiful world of watercolour painting