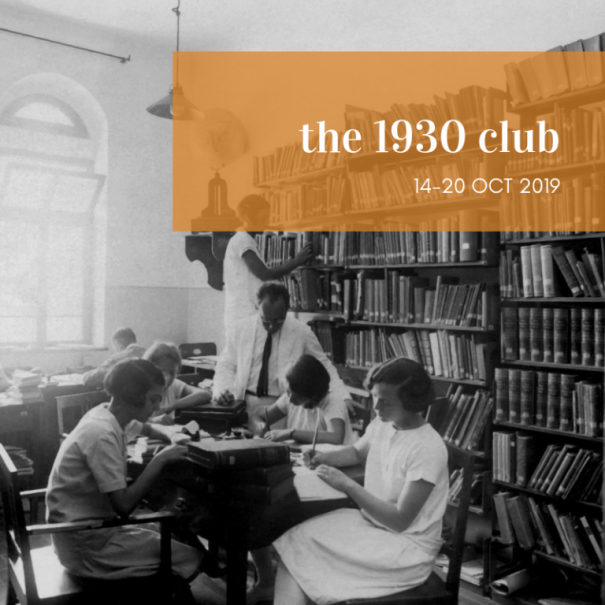 This is week I’m joining the 1930 Club and celebrating books written or published in that year, though I had some trouble finding something to fit the bill, which is very odd when when you consider how many books I have! Anyway, I plumped for Agatha Christie’s Murder at the Vicarage so I can support the event, which is organised by Simon over at Stuck in Book, and Karen at Kaggsy’s Bookish Ramblings. I had read this before, but I think my memories must have been heavily influenced by the two TV versions, because on re-reading it wasn’t quite as I remembered. For a start, I was surprised to find the narrator is actually the vicar – I’d have laid money on it being  the  ‘authorial voice’. And he plays a much greater role. Some characters were cut  in both TV shows, (but that always happens); the ending was changed, and I’m not sure either of them got the period right – both were more 1950s than anything else, and if this was published in 1930, the setting would, I think, have been late ’20s. Of the two, the BBC dramatisation featuring Joan Hickson was by far and away the best. She was brilliant as Miss Marple, and the production team did a pretty good job capturing the feel of the novel, and it made for enjoyable watching. The ITV version had me jumping up and down with rage, because it played fast and loose with the story – I don’t know how they got away with calling it Agatha Christie’s Marple, because it wasn’t her creation at all. And Geraldine McEwan wasn’t my idea of Miss Marple.

Anyway, this post is supposed to be about the novel, which is much superior to the dramatisations (books usually are), and is a jolly good read, which kept me guessing even though I knew the killer – Christie isn’t called the Queen of Crime for nothing! I am sure practically everyone knows the plot: basically bad-tempered Colonel Protheroe, the local magistrate, is shot in the head in the Vicar’s study. while the vicar has been lured away on a false emergency call… I know, it sounds like a game of Cleudo, but it’s more complicated than that Seemingly, a broken clock pinpoints the time of death… But does it? There are lots of questions, and nothing is as simple as the officious Inspector Slack thinks, because nothing quite adds up. It’s like a jigsaw which doesn’t quite fit. But along comes Miss Marple, the Vicar’s elderly, neighbour, who moves the pieces around to make a different picture.

This is her first starring role in a full-length novel (she had previously appeared in short stories). We meet her while Griselda Clement, the Vicar’s much younger and rather ditsy wife, is doing her duty as ‘vicaress’ by providing the gossipy old ladies of the village with  ‘tea and scandal’ at four o’clock. “Miss Marple is a white-haired old lady with a gentle, appealing manner – Miss Wetherby is a mixture of vinegar and gush. Of the two Miss Marple is much the more dangerous,”  Rev Clement tells us. Later he enlarges on this by adding: “I should have never have dreamed of describing Miss Marple as trusting.” And, indeed, she is not. She thinks the worst of everyone, and her habit of comparing present events with seemingly random things and people from the past enables her to make connections and draw conclusions that other people miss. Nothing gets past her, as Christie makes clear: “Miss Marple sees everything. Gardening is as good as a smoke screen, and the habit of observing birds through powerful glasses can always be turned to account.”

Miss Marple may have led a quiet life in a quiet village, but she knows about human nature, and is a noticing sort of person. From her garden she has a bird’s eye view of the Vicarage garden and the shed which artist Lawrence Redding is using as his studio, and she can also see quite clearly when Anne Protheroe, the colonel’s wife – and Lawrence’s lover – walks across the lawn.  At one point, while talking to Colonel Melchett, the Chief Constable, Miss Marple insists that Mrs Protheroe was not carrying a pistol:

“I can swear to that. She’d no such thing with her.”
“You mightn’t have seen it.”
“Of course I should have seen it.”
“If it had been in her handbag.”
“She wasn’t carrying a handbag.”
“Well it might have been concealed – er – upon her person.”
Miss Marple directed a glance of sorrow and scorn upon him.
“My dear Colonel Melchett, you know what young women are nowadays. Not ashamed to show exactly how the creator made them. She hadn’t so much as a handkerchief in the top of her stocking.”

Wonderful, isn’t it! But there is, of course, a twist to the tale…

I think Agatha Christie must also have been a keen observer and known a fair bit about human nature! I know there are those who decry her for portraying caricatures rather than characters (especially when it came to writing about the ‘lower’ classes) , but here she wrote about the way of life she knew best – well-heeled middle class people with a particular set of values, and unearned incomes that helped pay for servants to look after them. There’s a fair amount of domestic detail (and social comment), just as there is in many of the more highly acclaimed novelists of the period. I particularly like Mary, the Clements’ slovenly maid, who has no housekeeping skills whatsoever, either burns or undercooks the food – and refuses to be awed by her ‘betters’. If Miss Marple had the training of her, poor Mary would behave in an entirely different way. But, as Griselda points out, if Mary was any good she would be off working for someone else, and they would be left without a servant, because they can’t afford anyone better!

I thought the characters were quite well drawn, even the ones who only play a small part in the drama, like Hawes the High Church curate, who has a secret he wants to confess, and the mysterious Mrs Lestrange, who is beautiful and cultured, but refuses to discuss her meeting with Colonel Protheroe shortly before his death. And let’s not forget Lettice, the Colonel’s daughter, who seems almost half-witted, but is actually far more shrewd than she would like you to think.

All in all it was a very enjoyable read, and if you’ve never read any Christie, this would be an excellent place to start.

12 thoughts on “Murder at the Vicarage”