I should have begun the last post with an apology for not writing anything for so long,, but I shall merely say that sometimes Life Gets in the Way. Anyway, I am reading A Lady and Her Husband (one of my new Persephones), and can’t write about it yet (obviously), so I’ve selected something completely different from the trunk: Georgette Heyer’s Death in the Stocks. It may seem an odd choice give that a), I have never read anything by the Queen of Regency Romance, and b), I remain wary of murder mysteries, but over the last few years I’ve amassed a stash of golden age and cosy crime books, because they’re perfect for reading on trains, and I spend a lot of time on trains. Consequently, my greatest praise is reserved for novels which are so engrossing that I forget to gather my possessions together before the train reaches its destination, and I have to make a mad dash for the door clutching book, backpack, case and coat! Death in the Stocks just made it into this category, not because it;s an edge-of-the-seat page-turner (it isn’t), but because it is so very entertaining. Having said that, I must admit I didn’t guess the murderer, which could be due to my lack of experience with the crime genre, but I think the reveal is based more on intuition than deduction.

As the novel opens Constable Dickenson, cycling home in the spooky moonlight, comes across what he thinks is a drunken reveller, asleep in the stocks on the village green. But closer inspection reveals the man, clad in full evening dress, has a knife in his back and is very, very dead. For those who don’t know, stocks were a form of punishment made from wood with holes in, where a criminal put his feet and was held firm by the ankles when the top slat was locked in place. The wrong-doer was then subjected to public humiliation – everything from their feet being tickled to having rotten fruit chucked at their head. I assume this is the origin of the term ‘being a laughing stock’.

Anyway, back to the story. The corpse turns out to be that of wealthy London businessman Arnold Vereker, who entertains his ‘fancies’ (a series of women friends) at his isolated weekend cottage. The local police being deemed incapable of tracking down the killer, Superintendent Hannasyde, from Scotland Yard, is sent for. He quickly establishes that the dead man was universally disliked, and the prime suspects are Arnold’s much younger half-siblings Kenneth and Antonia (known as Tony), who make no secret of the fact that they hated him. Kenneth, who is short of cash, is due to inherit Arnold’s fortune, while Tony visited the cottage, spoiling for a row with her half-brother, and has blood on her skirt. They are charming, but rather feckless, regarding the whole thing as something of a joke, and behave as if they are characters in  play, so you are never quite sure whether they are telling the truth, acting out a part, or covering up for each other. Could either or both be the killer?

Their maid Murgatroyd, cared for them when they were children, and is still looking after them and trying to keep them out of trouble. Is she telling the truth about her whereabouts on the night of the murder – and how far would she go to protect her charges? What about their solicitor Giles Carrington, who is equally concerned for Tony and Kenneth’s well-being, and is referred to as a cousin (though the exact nature of the family relationships confused me). Is he genuinely anxious to help uncover the murderer, or does he have an ulterior motive? And Tony’s fiance Rudolph Mesurier is definitely a shady character: he has been pilfering money from Arnold’s company – but would he kill to prevent exposure?  Neither Kenneth’s gold-digging fiancee Violet, not his old friend Leslie (childhood sweethearts perhaps) seem likely killers, but what about ne’er-do-well brother Roger, who returns from the dead to claim his inheritance? The crime seems insoluble, and there is a second murder before the sleuths reach a conclusion.

I came across Death in the Stocks in one of Moira’s posts at the ever-excellent clothesinbooks,  thought how interesting, then forgot about it until the other week, when I spotted a copy while sorting through a box of donations at Oxfam. She rated it quite highly, but I didn’t know what to expect, and admit I was pleasantly surprised. It may not be a literary masterpiece, but it’s well-crafted, with some nicely drawn characters, and a plot that romps along with tremendous pace. Heyer has a light touch, and can be very, very funny – so much so that there were times when I wondered if we were meant to take the book at all seriously. There are a lot of literary references – you’ll have fun trying to place them – and a lot of dialogue, which I don’t always like, but I make an exception here!

Like many golden age crime writers, Heyer has some lovely depictions of social attitudes and lifestyles, which are incidental to the story, but show the subtle nuances of class difference in her day (this was written in 1935). Take Tony and Kenneth, who are intelligent, well educated, move in the best society, and are generally short of money, yet they still employ their old nanny – do they pay her I wonder? Or does she have some private income? I wouldn’t be surprised if her cash helps to keep them afloat. And they are unbelievably rude to Violet who is beautiful but dim, and obviously not ‘one of us’ with her cliches, silver nail varnish and use of the word ‘personally’.

Then there is the hall in Arnold’s cottage, which cannot be considered in good taste, as Tony denies all responsibility for the decorations which are in ‘modernist style, with curtains and a carpet of cubist design, a number of tubular steel chairs, and a squat table of limed oak’. The kitchen is ‘pleasant’, but has a small electric brazier (I assume this means a fire) attached by a a long flex to the light fixture, which is probably very much of its period – many electrical appliances were connected to light sockets at that time. I love domestic details like this.

And I love the description of the man’s dressing gown ‘of expensive looking brocade’ which Antonia is wearing when we first  meet her at the cottage. It sounds so exotic, and sophisticated, like a costume from a Noel Coward play – more like a long smoking jacket perhaps, and definitely not the sort of shapeless woollen garment my father wore! She must have a penchant for men’s clothes, because later we see her at breakfast, clad in men’s pyjamas, much to the horror of Murgatroyd, who is upset, not so much at the outfit, but because it is Sunday! Is it worse for a woman to wear men’s pyjamas on a Sunday than any other day of the week I wonder? And are we as judgmental and concerned about appearances today as people were then?

On being told that the dead man took women friends down to his cottage, women who were not his mother or sister, the local police inspector says: “Oh, that kind of female!”. There is a world of criticism implicit in those word, but for the women rather than for Arnold – people might deplore his taste (in women and decorations) but they don’t condemn his morals.

As so often with novels of this period, I found myself pondering the roles of women, and how their lives have changed. The young women in Death in the Stocks may consider themselves to be modern, independent girls-about-town, but they have more in common with Jane Austen heroines than they do with 21st century women, and mustmake ‘good’ marriages if they are to survive.

I need to wind this up, but before I do I must mention a wonderful piece of writing where Arnold’s long-lost brother Roger is described as being unable to get properly drunk because he is ‘pickled’ by years of heavy drinking. I always thought of this as being a very modern idiom, but obviously not. At any rate, it made me think of him as a 1930s version of Keith Richards, and I felt much more kindly towards him after that! 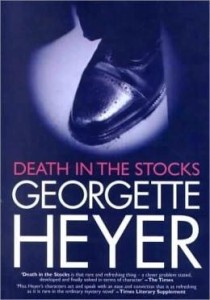