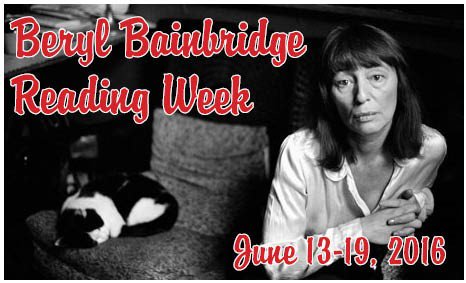 The Bottle Factory Outing – this is the second book I read for Beryl Bainbridge Week, and I loved it, but I’m going to try and keep my comments very short, because we are at the end of the week, and I haven’t got much time. And it is a very difficult to write about this book without including spoilers, so anyone who is bothered by that had better stop reading now!

Freda and Brenda share a room in  a run-down lodging house in Hope Street, which is a bt of a misnomer really. You’d need to be pretty optimistic about life, the universe and everything to survive here for very long. The two women  work in a wine bottling factory, where virtually everyone else is Italian, and they couldn’t be more different.

They met at a butcher’s shop,when  Brenda burst into tears as the butcher asks: “Giving the old man a treat are you?” Her husband has left her, she says… so Freda takes her away. But it turns out that Brenda has been economic with with the truth and that she is the one who left,  because she couldn’t stand her husband coming home drunk from the Little Legion every night and peeing on the front step..

Leaving the marital home must have been one of the few occasions that Brenda makes a decision and initiates any kind of action. Despite her respectable background (private school, music lessons) she is, as Freda says, a born victim. She has stringy red hair, a thin face and short-sighted blue eyes, and thinks all the men are after her. And so they are, despite her unprepossessing appearance and lack of backbone. Perhaps it’s her acquiescence they like. She wouldn’t say boo to goose. She doesn’t  like chaos, or being the centre of attraction, or making a fuss, or upsetting people, or hurting their feelings – so she ends up doing and saying things she doesn’t want. But for all that she’s a realist, and doesn’t harbour any illusions about life has to offer. “She felt it was unwise to see things as other than they were,” Bainbridge tells us.

Freda, on the other hand, is a fantasist who refuses to see life as it is. Freda has a smooth, white skin, shining yellow hair, big blue eyes with curved lashes, and a rosy mouth. She sounds like a beautiful china doll, so it comes as a bit of surprise when you read on and find that:

“She was five foot ten in height, twenty-six years old, and she weighed sixteen stone. All her life she had cherished the hope that one day she would become part of a community , a family. She wanted to be adored and protected, she wanted to be called little one.”

Freda is in love with Vittorio, trainee manager and nephew of factory owner Mr Paganotti, and is convinced he reciprocates her feelings. But he has his eye on a nice, quiet, Italian girl, and is scared of Freda, whose personality is as overbearing as her figure – she is very assertive (some might say aggressive). And things come to a head when she organises a staff Outing so she and Vittorio can get to know each other better.

What follows is positively farcical, but the humour is very dark indeed. Nothing goes right on the day of the Outing. The van booked to transport people to a stately home in the country doesn’t turn up, so most of the staff are sent home. The favoured few set off in two cars, and end up at what I think must be Windsor Great Park – and Freda ends up dead (sorry about the spoiler). No-one wants to involve the police, so they take the body home and pickle it in brandy in a wine cask.

One of the party confesses to being responsible for her death, but questions remain. Is he really responsible? Was it an accident? Was it murder? Was he following orders? Or covering up for someone else?

We’re in classic Bainbridge territory, with two wildly disparate (and rather unlikable) protagonists, and a cast of others who are just as separated from society, including a randy Italian, a drunken Irishman, Brenda’s mad mother-in-law, who appears at the house in Hope Street flourishing a gun. As ever, none of these people listen to each other or make any kind of emotional connection. They are like trains running on single tracks which never converge, although they do occasionally cross each other.

Beryl Bainbridge Week was otganised by Annabel, at Annabel’s House of Books, and her first post of the week is here.