Skip to content Skip to navigation
It’s June, and the year is half gone, so I think it’s time we took another look at Mrs CW Earle and discover what advice she has on offer for the month in her 1897 lifestyle guide, Pot-Pourri from a Surrey Garden (you can see my original post here).

She starts with her thoughts on looking after your hands. She tells us:

It must admitted that one of the great drawbacks of gardening and weeding is the state into which the hands and fingers get. Unfortunately, one’s hands belong not only to oneself, but to the family, who do not scruple to tell the gardening amateur that her appearance is ‘revolting’.
She advocates constant washing of the hands, and recommends the ‘never-failing’ use of Vaseline to keep them smooth and soft. Actually, I’m not at all sure I’d want to smear my hands with Vaseline, because it’s horribly thick and sticky, and it wouldn’t be absorbed into the skin nice and quickly, like modern hand creams. Surely you’d leave sticky, greasy marks on everything you touched. Anyway, Mrs E offers an alternative which, she says, is even better – a mixture of glycerine and starch, kept ready on the washstand after washing and before drying the hands. I assume the starch would have been the old-fashioned laundry stuff, presumably in plentiful supply when the book was first published.
She also informs us that old dog-skin or kid gloves are better for weeding and many other tasks than ‘so-called’ garden gloves. And housemaids’ gloves, made from wash-leather, and available at any village shop, were ‘invaluable’ for ‘many purposes’.
Wash-leather, I think, was what we used to call ‘shammy’ (or chamois) leather when I was a child. I seem to remember it was yellow, good for cleaning windows, and polishing metal, and could be used wet or dry, and washed and dried when it was dirty. In Victorian and Edwardian times housemaids wore wash-leather gloves, so I guess they were a precursor of today’s rubber gloves. Presumably they offered some protection for the hands, and also ensured maids didn’t leave grubby fingerprints on furnishings and surfaces!

For many years this fruit was poison to me; now it gives me pleasure to think that I live almost entirely upon it for some weeks in the summer, eating it three times a day, and very little else, according to the practice of Linnaeus, as quoted in March’
In growing strawberries, everything depends on making some new rows every year; layering the runners early, too, makes a great difference in the young plants the next year.
She also mentions that Dainty Dishes (her cookery ‘Bible’) has instructions for old-fashioned ‘receipts’ for strawberry jam – but, alas, she doesn’t share them with us! However, she gives us a selection of other recipes. Apparently, a mayonnaise soufflé of crab is ‘rather out of the common’ or a summer luncheon. It’s very much of its time, involving buttered paper inside the liner of a dish, seasoned crab, whipped aspic jelly, mayonnaise sauce, fried breadcrumbs and an icebox.
But never fear, there’s a ‘less complicated’ luncheon dish (does anyone still prepare ‘luncheon’ dishes I wonder):
Take some ripe tomatoes, equal-sized; cur a round hole and scoop out a portion of the middle, fill in with cold minced chicken and Mayonnaise sauce, put some aspic in the dish, and serve the tomatoes on pieces of fried bread, cold.
Life, as Shirley Conran said, is too short to stuff a mushroom, and I reckon the same thing could be said for tomatoes!

In addition Mrs Earle instructs us in the art of making chutney, cooking crisp cauliflower – and cooking cucumber, which sounds odd, since we eat it raw in salads. Here you’ll find three different methods for serving cucumber hot, and I suppose it’s not really any different to cooking marrow or courgettes, just a little more watery perhaps. I’ve ignored her first two suggestions, but here’s the ‘receipt’ for the third:

A third way is to take a large old cucumber, peel it, cut of the two ends, and boil it very lightly. When done, make an incision down the middle, not quite to the two ends, scoop out the seeds, and fill the hollow with a light stuffing of suet, herbs, breadcrumbs, and egg. Serve it whole, like a roly-poly, with a yellow Dutch sauce around it.
I’d never come across yellow Dutch sauce, but it turns out to be hollandaise sauce, so the clue was there in the name. I’m tempted to try it, but with a different stuffing, but I’m worried the cucumber might disintegrate! 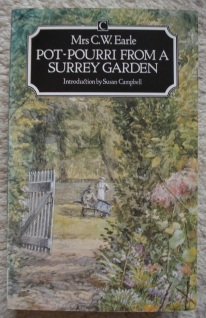 2 thoughts on “Cures For ‘Gardening Hands’”