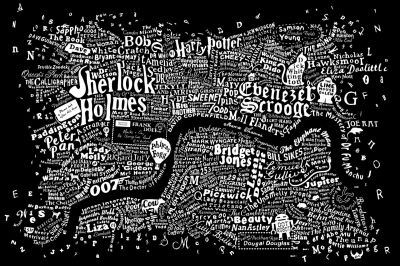 Now for something completely different. This literary map of London turned up from one or other of my Facebook friends, and I think it is fantastic, and I love the way it uses names to build up a picture of the city, so I thought I’d share it here – I just hope I don’t run into any copyright problems. According to the blurb on The Independent site I copied it from, the map is ‘both a snapshot of London’s literary history and beautiful in its own right’. I’m sure no one would argue with that.

Apparently, more than 250 novels were ‘mined’ in order to make the Literary London Map, and each name is placed on the part of the city they’re associated with. Initially I thought it was only made with characters from books, but looking closely I spotted Aphra Behn and Ben Jonson, so it seems authors rub shoulders with their creations. If I had cash to spare, which I don’t, I would buy it. As it is I shall content myself with looking at it online and seeing how many names I can find (and how many I know!)
It’s from the Literary London Art Collection, where an explanatory note states:
Literary London is a collection of art celebrating the capital’s rich literary heritage. Bringing to life the army of fictional characters who were born here. From the dreamers and dandies to the eerily eccentric and downright dangerous. Not just the living, but also the walking dead. All the winged and many-legged creatures who’ve been immortalised in the pages of novels. And who continue to inhabit and delight imaginations the world over. The larger than life personalities conceived by an equally eclectic horde of authors obsessed with London’s every nook and cranny, its bawdy taverns and refined townhouses, as well as the cities notorious underbelly, its clinks and courts of law.
Literary London is an art collection from Run For The Hills, conceived and created by London-based artist Dex in collaboration with Interior Designer Anna Burles, the duo who produced the map of literary London.

4 thoughts on “A Literary Map of London”