Skip to content Skip to navigation
I must say I found Stella Gibbons’ The Matchmaker somewhat tedious: I struggled to finish it, and I wouldn’t read it again although, like the curate’s egg, it was good in parts. I knew her other writing didn’t follow the satirical style of ‘Cold Comfort Farm’, but this lacks the sparkle and wit of that first novel, as well as its charm and humour. ‘The Matchmaker’ was published in 1950, almost 20 years later than the earlier work, and in that period Gibbons seems to have lost her youthful disregard for literary and societal conventions.
For me, one of the downsides is that you see life through the viewpoint of too many different people, and each time the narrative focuses on one person, the others step back into the shadow, so somehow there seems to be no central character to hold things together, and you are never with one person long enough to get to know them and find out what makes them tick, and no-one is really fleshed out, so it’s difficult to believe in them, and many of the characters are little more than stagey stereotypes.
To start with we meet Major Ronald Lucie-Browne (who is still on active service in Germany), his wife Alda and their three young daughters who have just moved to a cramped, isolated cottage in Sussex, having led a nomadic existence since their own home was bombed. Among the host of other characters are their grumpy chicken-farming neighbour Phil Waite; lazy Italian prisoners of war, and brash Landgirl Sylvia, who wants to be an actress.
Actually, I thought the most interesting person was Alda’s old school friend Jean, who comes to stay following the death of her parents. Wealthy, elegant and lonely, Jean is desperate to find a husband but, despite Alda’s efforts to help, she has been unsuccessful. However, her reactions to Alda’s interference (for that, after all, is what it is, however well intentioned) are not quite what you expect. And just as you start to think Jean has hidden depths and should have been developed to take a more central role, she is whisked away, and you’re almost at the end. But you do find out what happens to her, in a letter which is almost an afterthought, as if Gibbons suddenly realised she needed to tie up loose ends.
I guess the book is very much of its time, but the attitudes about women, foreigners and the working class felt much more redolent of an earlier period – the 1930s perhaps. But I suppose in 1950 the new, post-war world which embraced modernism and new ideas hadn’t really got under way. A lot of the most offensive comments are made by Gibbons as author, not by the characters, and I found her constant asides were an intrusion which, especially when combined with the shifts of emphasis, and the lack of a strong plot line, means there’s a lack of focus, with no clear sense of direction or overall theme. 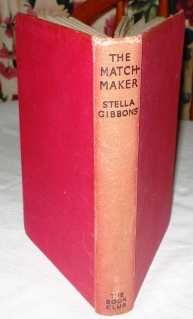 There’s an obsession with marriage and catching a suitable man which rivals anything you find in Jane Austen, but is nowhere near as humorous, or as well written, and women are mainly portrayed as empty-headed with few, if any, interests outside the home and family. Alda, for example, is very dismissive of Sylvia the Landgirl, claiming she is vulgar and ignorant. But Alda herself is not that bright, and her reading (not that she ever seems to look at a book) has been shaped by 12 years of marriage to a ‘clever’ man. For some reason that throw-away line about Alda annoyed me more than anything else. Why doesn’t she make her own choices about books, and form her own opinions? I can’t equate her attitude to that of my mother and her friends, who would have been young married women in the period this novel portrays, and they were much more independent and intelligent. And, let me tell you, had my father ever tried to influence her reading matter then my mother, usually the most peaceable of women, would probably have thrown the entire bookcase at him!

I could go on at great length about the things in this novel that irritated me beyond measure (especially Alda). But I’ve gone on quite long enough, and before wrapping this up I should mention some of the good things – and there were quite a lot of them. For example, Gibbons is good at describing the small, everyday things of life that are so important to people, and she’s brilliant at providing telling details giving clues about status and social distinctions. But it wasn’t enough to make me want to keep the book.

4 thoughts on “A Tedious and Irritating Read!”