Skip to content Skip to navigation
It was my my birthday this week, and my wonderful daughters celebrated by treating me to a surprise day out in Oxford, because I’d always wanted to there. They arranged it all for last Saturday, a few days before the birthday, so my Elder Daughter could get back from Devon, and they swore the Man of the House to secrecy, and none of them would reveal anything about the plan, despite the fact that I kept badgering them to try and find out what was happening! It wasn’t until we were at New Street Station that they told me: they presented me with a card they had made, with pictures of themselves on the outside, and an outline of what the day held in store written inside. I was so touched I burst into tears, which probably embarrassed them horribly, but if it did they didn’t say. So here are some of the photos for my Saturday Snapshot.
It was the most perfect day – the best birthday pressie I’ve ever had, and the highlight was a posh afternoon tea, with proper tea made with tea leaves (and a strainer in it’s own little dish, to catch the drips), and sandwiches served up with a salad and crisps, and huge home-made scones with lashings of cream and jam, and home-made cake (we chose the coffee and marscarpone, and it was heavenly). The girls had planned a meal out with the Man of the House when we got home in the evening, but the three of us were stuffed we couldn’t eat another thing, so the MOTH made do with take-away fish’n’chips instead! However, the two of us are going for a meal today or tomorrow, because it was his birthday this week as well.
Oxford really lived up to expectations. I loved the architecture, and all the literary connections – Thomas Hardy’s Jude, and Colin Dexter’s Morse, Auberon Waugh’s Charles and Sebastian and their friends, as well as Philip Pullman, Charles Dodgson (better known as Lewis Carroll, as I’m sure you are all aware), CS Lewis, JRR Tolkien… there’s an endless list of writers who were students at Oxford. The list of famous alumni in other fields, like science, history and politics is every bit as impressive, and I was surprised to discover that Sir Robert Peel, founder of the police force, who was MP for Tamworth (where I live) studied at Christ Church. Sir Robert, who served two terms of office as Prime Minister, took a double first in classics and mathematics. At his old college we were interested to see a door, with the words ‘no peel’ embedded in it in nails, hammered in by students who were outraged by Peel’s bill calling for the emancipation of Catholics, and consequently opposed the idea of him being appointed to a university position!
Christ Church also boasts a beautiful meadow hidden away in the heart of the city but, sadly, we didn’t get to see the great hall at Christ Church (where the Harry Potter movies were filmed) because it was in use, but the entrance fee was reduced. and we wandered around the site and looked at the shrine of St Frideswide, patron saint of Oxford, in the Cathedral at the college (apparently it’s the only college anywhere to have its own cathedral). According to legend, Frideswide prayed for divine help  to escape marriage, and her unfortunate suitor was struck blind, whereupon she was so full remorse she prayed again, and his sight was restored – and off he galloped, as fast as ever he could, glad to get away from the place I should think!
There was so much to see and do we spent most of our time wandering around and soaking up the atmosphere, but I bet even if you stayed for a couple of weeks you wouldn’t have time to see and do everything. We squeezed in brief visits to the Bodleian Library and the Ashmolean Museum, the first public museum in the world, which is another place with a local link since founder Elias Ashmole’s Lichfield home can still be seen just around the corner from the Oxfam book shop where I volunteer. And, of course, Oxford is where Oxfam started back in 1942 when the Oxford Committee for Famine Relief was established.
As we walked around the city Lucy used her mobile phone to get directions and information, and gave us a guided tour, but I took so many pictures, and didn’t make any notes, so – I’ve already forgotten most of what she said, and need to check out some of my photos, to find out what they are. I took lots of bits of buildings that caught my eye: decorated clocks, sundials, towers, spires, domes, cupolas, plaques, gargoyles and so on.
There were lots of fascinating doors, gates, arches, passageways and alleys that we peered through to catch a glimpse of what lay beyond (especially the ones where there was no public access!).

We walked under the Bridge of Sighs, which links Hertford College with New College Lane, and is generally thought to be based on the Venetian landmark of the same name, but I gather this is now regarded as an urban myth, as is the tale that only the lightest students were allowed to use it!

One of the many amazing things about Oxford is the vast number of bicycles you see. Cyclists are everywhere, even on the pavements, and there are so many cycles stacked in some places, like the area outside the railway station, that I wondered how people ever find their own machine among all the wheels and spokes and saddles and handlebars. And that led me to ponder whether there is a collective noun for a group of bikes or cyclists… a ride, perhaps?

We looked at shops – even the stores seemed to be housed in historic buildings, and the covered market, opened in 1774, has a lovely ceiling and was established to clear the streets of ‘untidy, messy and unsavoury stalls’. I can think of towns which might from the same approach today! Best shop of all is the tiny Alice Shop selling, as its name implies, all kinds of things to do with Alice and Charles Dodgson. Every inch of space is crammed with goods. There are editions of the books, and toys and games, and mugs, bags, ornaments, postcards and a host of other items. I guess tourists would consider it gimmicky and touristified, but we loved it, and I bought a calico tote bag, with Tenniel’s characters from both books printed on it in red.
There are an awful lot of buildings packed into what is really a fairly small area. Oxford isn’t a large city by any means, but there are 38 colleges, and six halls attached to religious institutions, as well as shops, cafes, offices, hotels and so on. University College, Balliol and Merton were all established in the middle of the 13th century, and all claim to be the oldest college. And rivalry in the non-academic sector is just as fierce, with the Grand Cafe, mentioned by Samuel Pepys, believing itself to be the first coffee house in the country, while the Queen’s Lane Coffee House maintains it is the oldest coffee house in Europe. You might think there would be no room for green spaces, but there is grass in the college quads, and parks and gardens, and the meadow at Christ Church, and lots of magnolia trees blooming in small spaces in front of buildings.
We passed the remains of Oxford Castle on our way back to the station where historians now believe Geoffrey of Monmouth produce the first written tale about King ~Arthur in his History of the Kings of Britain, but we didn’t have time to stop because we had a train to catch. It really was a ‘snapshot’ kind of a day, where I came home with a kalaidescope of views and memories, and the nice thing is that now I know how easy it is to get there, and what a beautiful city it is, I’ll be able to go back and spend more time exploring places I’ve glimpsed briefly during my special day out. Anyway, I’ll leave with photos of my girlies and I enjoying our afternoon tea. 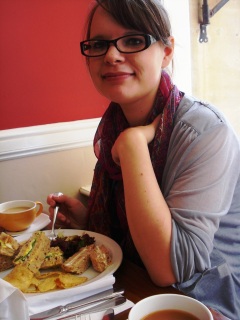 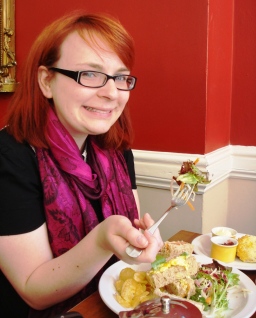 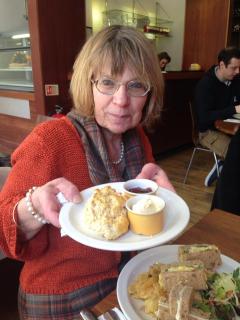 Saturday Snapshot is hosted by Alyce at http://athomewithbooks.net/2013/05/saturday-snapshot-may-11/ . Press on the link to see more photographs taken by participants.

38 thoughts on “A Birthday Treat in Oxford”