Skip to content Skip to navigation
Two reviews today as I’m still trying to catch up on posts. The reading is more or less on track, but the writing isn’t! There’s a link of sorts between these books, since they are both about about the environment, with reflections about man’s place within it, and both authors are intelligent, articulate, passionate about their subject, and excellent writers. 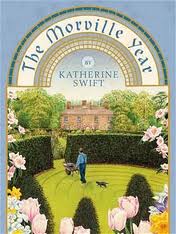 First up, The Morville Year, by Katherine Swift. Her earlier book, ‘The Morville Hours’, which charts her creation of a garden in the grounds of the Dower House, at Morville, in Shropshire, is a superb mix of gardening know-how, history and folk-lore, with a rich appreciation of the natural world and the passing of the seasons. ‘The Morville Year’, which is every bit as good, is a selection of the weekly articles she wrote for the Saturday edition of The Times between 2001 and 2005. She writes about the weather, her work in the garden, taking up bee-keeping, buying a motorbike, local places events – and, most of all, the plants themselves. In her introduction she explains:
When I began the research that would underpin the garden, I found that every plant had a story – who first grew it or collected it from the wild, gave it a name or painted its picture, wrote a poem about it or used used to cure some ailment? Every one came trailing clouds of glory.
That urge to discover everthing she can about each and every plant makes for some fascinating reading. On 29 January 2009, for example, she discusses the weird world of lichens: there are 1,700 varieties in Britain, and each is made up of two organisms, a fungus and an algae, living in perfect harmony, since neither can exist without the other. And did you know that those bright, crusty-looking orange and yellow lichens, and the flat grey and white ones, only grow on alakine rock, like limestone? And the cushiony green and pink types thrive on acid surfaces like granite, slate and sandstone. And all lichens need a smooth surface – they won’t grow on new, smooth, polished gravestones… and they need sunshine… and clean air. I never realised they were so interesting, but I’ve been looking at them in a whole new light since I read this.
And Swift makes some wonderful observations about plants and wildlife. In one of her October pieces she writes:
The search for hibernation sites is also on for the newly-mated queen bumble-bees and the big brown-and-yellow hornets (surprisingly pacific despite their fearsome appearance) – the Harley-Davidsons of the insect world, with a deep resonant buzz quite unlike the Suzuki whine of the black-and-yellow wasps which have terrorised us all summer.
The comparison may sound odd, but think about it for a moment, and you realise she is absolutely right.
Gardens are generally regarded as well ordered places, where man (or woman) has tamed nature, but Swift is concerned about the extent to which gardeners can relinquish control, stepping back to allow nature to take take a hand and create some wildness. 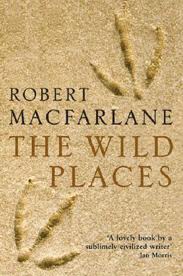 And it’s wildness that attracts Robert MacFarlane. In The Wild Places he takes his interest to what many of us would consider to be extreme levels, for he searches out the most inaccesible places it the British Isles, so remote that the land remains untouched by human activity. Each site he visits has a different landscape – his journeys take in an island, a hidden valley, a moor, a mountain summit, a forest, and an ancient holloway.
Much of his exploration is magical. On the island of Ynys Enlli he watches seals and birds, finds a heart-sized stone of blue basalt, marked with white fossils, and sets ‘a thin shell afloat, carrying a cargo of dry thrift heads’. But elsewhere the terrain is almost alien. When he tries to climb the Pinnacle of of Sgurr Dear, above Loch Coruisk, you sense that this land does not wan him there and MacFarlane – who is obviously an experienced traveller well able to cope in adverse conditions – is surprised by his reaction.
I stood, walked to the start of the Pinnacle’s incline, and laid a hand against its rock. It was so cold that it sucked the warmth from my skin. But this rock had once been fluid, I thought. Aeons ago it had run and dripped and spat. On either side of the Pinnacle, the ground dropped immediately away. I took a few steps up the fin. Suddenly I felt precarious, frightened: balanced on an edge of time as well as of space. All I wanted to do was to get back off the ridge, back down into the Basin.
At this point he decides it not merely be dangerous to climb, but ‘impertinent’, which seems a strange word to use, but you understand that here is something powerful and ancient.
Like Swift, he’s the kind of magpie author who gathers facts, and one piece of information leads him on to another, and another, and another… In the chapter on Ynys Enlli for example, he talks about the tide race, ancient Irish monks, the origin of the word ‘pilgrim’, the connection between inner and outer landscapes, George Bernard Shaw’s trip to the Skelligs, boats, faith, the wildlife n the island, the word ‘wild’ and our reaction to wilderness, and the Chinese wanderers who wrote and painted, and believed there was no divide between nature and human.
That sense of oneness with the natural world pervades the writing of Swift and MacFarlane. The landscapes they inhabit may be very different, but each knows their place, and they recognise its importance. And each makes a plea for us to work with nature, nurturing and preserving what we have.

2 thoughts on “Gardens and Wild Places”