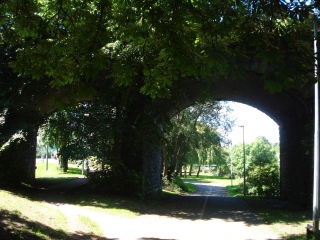 This week’s Saturday Snapshot hasn’t moved far from Tamworth Station, because on this day (August 4) in 1839, railway pioneer George Stephenson drove one of his engines across the newly constructed 19 Arches spanning the Anker Valley at Tamworth. Behind the engine (which was named after the town) were six carriages packed local VIPs and directors of the Birmingham and Derby Junction Railway Company. They had left Curzon Street, in Birmingham, earlier in the day, en route for Derby, where they enjoyed a celebratory lunch at a hotel before setting off on their return journey.

But it’s the Arches which fascinate me. When I was working I drove through one of them as I went backwards and forwards to the office, and each time I walk into town, or down to the station, I reach out to touch the stonework, and wonder anew at the skills of those Victorian engineers. At the time the railway viaduct, started by Stephenson, but completed by his son Robert, was one of the marvels of the age, enabling the new-fangled trains to cross the river and its low-lying flood plain. 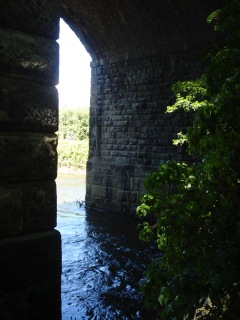 It’s 45-feet high (which is, I am reliably informed, around 7 metres), built of huge slabs of rustic-looking rock (though these may be facings on brickwork) and it runs across the landscape for 417 feet (that’s more than 200 metres), crossing two busy roads, a park, the River Anker, and an area of open land. One arch is slightly lower and wider than the others, and two have small walls which once formed part of gateways.

It’s a Grade Two Listed structure which, hopefully, means it is protected, but that protection doesn’t seem to extend as far as keeping it clean and tidy, and some parts look sadly neglected, with weeds and bushes sprouting from the parapet (actually, I think this top bit may be called a cornice, but I’m not very familiar with architectural terms). One year a small tree flourished above an arch, until it was removed following complaints from residents. 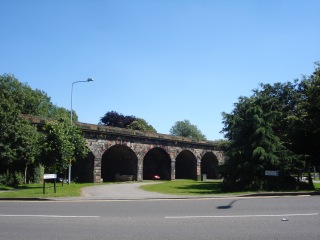 The trains still run across the Arches (more correctly known as the Bolehall or Bolebridge Viaduct, but no-one ever calls them this) on their way from Birmingham to Derby on the West Coast Main Line, stopping at the upper level at Tamworth Station. But two major rail lines cross at Tamworth, so there’s a lower level providing a stopping place for trains on the Cross Country Line travelling between York and Bristol.

This second route, originally the Trent Valley Line, was started by a new company whose chairman was Edmund Peel, brother of Sir Robert Peel (he and his family keep popping up in Tamworth’s history) but they were taken over by the London and North Western Railway long before work finished. That, in turn, merged with other rail companies (including the Derby Junction) to form the Midland Railway in 1844, and it was three years later that the Trent Valley Line opened, along with Tamworth’s first station (a gorgeous Victorian Gothic affair) which was demolished in 1961 and replaced by the very nasty concrete block which is still there today, and doesn’t deserve to have its photo taken.


Sources: Tamworth, Past and Present, by John Harper; Tamworth, A History, by Richard Stone.

36 thoughts on “Underneath the Arches….”