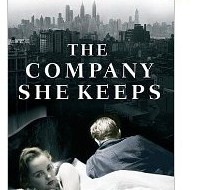 I love Mary McCarthy’s ‘The Group’, and her autobiography, ‘Memoirs of a Catholic Girlhood,’ but I could not get along at all with The Company She Keeps. I got this from the library, and renewed it several times, as I kept picking it up, and trying to read it, and putting it down, but I didn’t like the style of writing, the story, or the central character, so I gave up, and it will remain remain unfinished. I always feel slightly guilty about not completing a book – I think it must be a hangover from my schooldays, when I assumed everything must be read from beginning to end, whether one enjoyed it or not.

This was McCarthy’s first fictional work, based on her own life apparently, and published in 1942 as a novel in six parts. Each of the six sections (you really can’t call them chapters) had previously appeared as stand-alone-stories in various publications, including Harper’s Bazaar which explains why the ones I read had the feel of a short story. There’s no real plot: instead each episode offers a different view of Margaret Sargent, giving brief glimpses of her life and personality. These sketches slot together to form a multi-faceted figure, but she remains elusive, and the various parts never seem add up to a whole woman – though I admit that is is an unfair comment since I didn’t read the whole book.
It’s an unusual format for a novel, and the form and content must have seemed shocking when it was first published. For Margaret, or Meg as she is sometimes known, is on a quest for love, moving from man to man as each encounter and relationship fails to live up to her expectations.
In the first tale, Cruel and Barbarous Treatment she is never named, a reflection of the need for secrecy surrounding her affair with the Young Man, and her own uncertainty about who she is. Eventually, however, she’s driven to tell her husband, destroying both her marriage, and the relationship with her lover: her passion, fuelled by the exciting urgency and anticipation of an illicit liaison,does not survive.  “She would never have left one man unless she had had another to take his place,” McCarthy writes. “But the Young Man, she now saw, was merely a sort of mirage which she had allowed herself to mistake for an oasis.” Fearing a frightening future where she is old and alone, she feels driven to find another man.
The second story, Rogue’s Gallery, was the one I liked the best, moving from the third person to a personalised account, as Margaret tells us about her time working as a stenographer for Mr Sheer, a dealer in objects of art at the Savile Galleries. We soon learn that : “Like Mr Sheer himself, that plural was imaginative, winged with ambition, but untrustworthy.” Margaret’s boss is is shifty, shady, and thoroughly dishonest, but she seems genuinely fond of him, in a purely platonic way. She never inquires too deeply into his business methods or his personal life, but she helps stave off creditors, and even buys him meals when he has no money. She only leaves when her typewriter is repossessed (after all, you can’t type without a machine), and she sees him from time to time afterwards. Here she is shown in a warmer light, as kind and caring, and not selfish and frivolous as she appears elsewhere .

After that it was back to Margaret’s amorous adventures (which are never explicitly described – it’s much more about her emotional response) and by the end of the third ‘chapter’ it all began to seem a little sordid, and she was tedious in the extreme, so I skipped through to the final piece, Holy Father, I Confess (and I didn’t read all of that). It’s here we discover that she was orphaned as a young child, and abused by a relative which, presumably, is supposed to explain her behaviour, and her inability to form lasting relationships. She’s seeking some kind of perfect lover because, I think, life only becomes real for her when she believes someone loves her, and she imagines she loves them back, but it’s all like a game, and I really couldn’t feel any sympathy for her. I found it hard to see her as a victim – on the whole she seems fairly predatory, and makes her own decisions about the actions she takes.

4 thoughts on “The Company She Keeps”